It is ten years since the first Interscale competition was held in the UK, so it was fitting that the 2004 event was held over here again. It was my first one, and I have to say it was a hugely enjoyable weekend.

The biggest difference to our normal national indoor scale events was the fact that it is spread over a whole weekend, which gives you a chance to spend more time with fellow modellers outside the sometimes pressured environment of the competitions. It was great to be able to meet the European entrants in person, especially as I had already been corresponding with some of them - always nice to put a face to a name.

Staying on campus was also good, because you were only 2 minutes walking (or staggering) distance from the University bar. The food was excellent, and much fun was had during the Sunday evening banquet and prizegiving, as various model aeroplanes and a radio controlled airship performed above the tables. I personally thought it was asking for trouble to have a diagram on the back of the menu showing how to fold it into a paper dart, and so it proved. You could tell who the serious competitors were, because they were at the far end of the hall trying to trim them to get the optimum glide....... It was a great evening, and it was well after midnight when we reluctantly let the porter lock the doors of the bar.

In some ways the flying was more relaxed than during the BMFA Nationals, because only two classes were flown per day, instead of four. On the other hand, There were a lot more entries, so the sessions took longer to complete. In addition, for the two open classes, Rubber and CO2/electric, six flights were made instead of the usual four.

Saturday was allocated to the Pistachio and open CO2/electric classes, with Peanut and open rubber on the Sunday. In addition there was an air race and mass launch both days which anyone could join in with.

The classes and rules were basically similar to the normal BMFA ones (for which see the Nationals report) but rather more stringent in some areas. For instance, in the open classes you had to specify the speed of the full size aircraft (to help the flying judges), also give a wing area, weight and wing loading (max. allowed is 15 g/sq.dm and 150 g all-up weight). The scores look different to those at the BMFA Nationals, because three judges are used for FAI competitions, instead of two.

Peanut and Pistachio competitors were allowed 9 official flights, with the best two added together to give a total flight time.

As usual, I had a new model to bring, only finished the night before the contest. This was a Pistachio Heinkel He 112B, built on the basis that if I did not enter this class, I would have nothing to fly on Saturday! 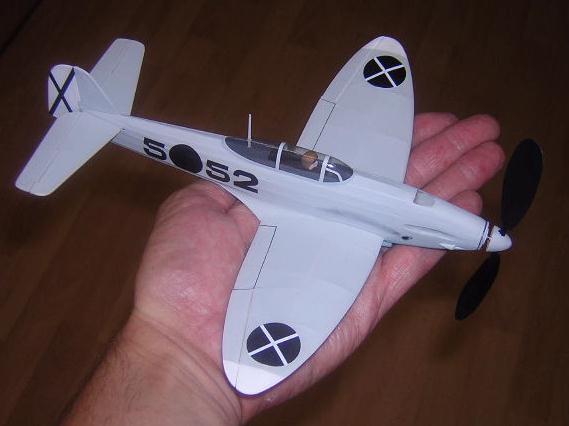 OK, I know it looks pretty, but it was rather an ambitious first Pistachio, and very heavy, even before I started piling the modelling clay onto the propeller spinner (5 grams without rubber). I think as a foamie, it could be a really good candidate, but this one is conventional construction, with double covered surfaces. Thanks to Richard Crossley's help, I was able to at least register a few flights, but my best one was only 13 seconds, and I was not able to reproduce that again. A good static score meant I finished fifth in class, which seemed rather unfair on the models just below me, which were flying round in splendidly sedate fashion, while mine was careering around the hall unpredictably at a scale speed of approximately Mach 3. One good thing about having several grams of clay on the prop spinner is that it acted as a useful shock absorber during the frequent head-on crashes into the wall!

I had better luck with the Fox Moth in Peanut, which finished third in class. I managed to push my best time up to 37 seconds, plus 10 for the ROG, but I am not sure there is much more to come. Just too heavy really - a point emphasised when watching it circulating alongside Mike Hadland's winning Jungmann. My model was going much faster, using thicker rubber, hence a shorter motor run. Still, I was very pleased with 3rd place.

My final entry was the Sparrowhawk in Open Rubber, which managed one good qualifying flight. Final placing was fifth, behind some really marvellous new models so I was not too disappointed. 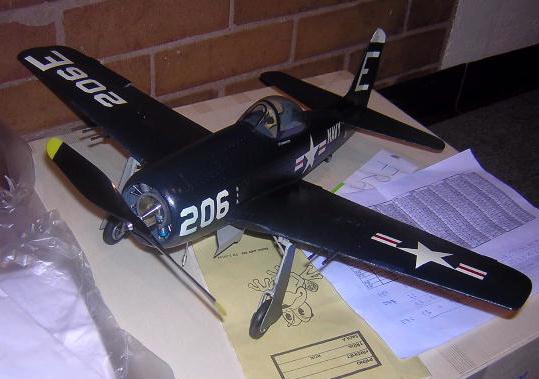 This splendid Grumman Bearcat made from foam was the work of Tonda Alfery, from the Czech Republic. I have read about Tonda and his models in the magazines for many years, so it was good to meet him at last, and see his work at first hand. The Bearcat was CO2 powered, and a very smooth performer, helped by the light weight of the model. It finished 2nd in class. 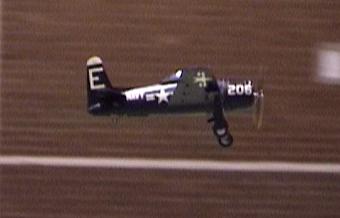 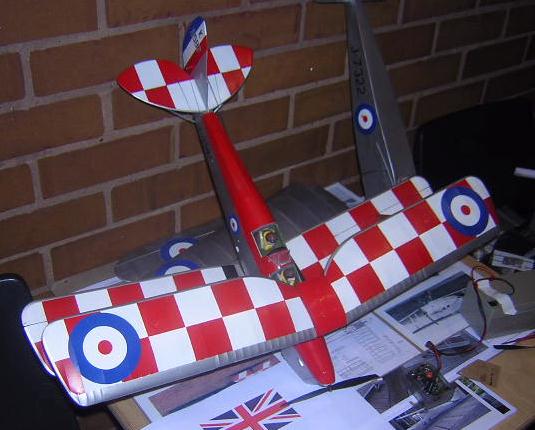 Haven't we seen this before somewhere? Derek Knight has converted his big Tiger Moth back to electric power again (it won the rubber class at the 2003 BMFA Indoor Nationals). Well, it is still a great model, and got easily the highest static mark in its class. The flight scores were not too shabby either, resulting in a convincing class win. 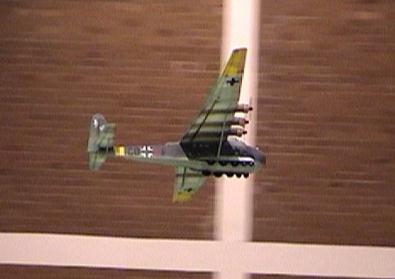 Pete Smart was wowing everyone with his electric Me 323 Gigant again, though this time he had a few snags during the competition flights with the model not getting safely back to earth before the motors cut. The resulting landings were somewhat brutal! The problem was eventually solved by adjusting the power settings and extending the low power phase on the motor timer. The best flight he did all weekend was after the competition on Saturday evening. Typical! 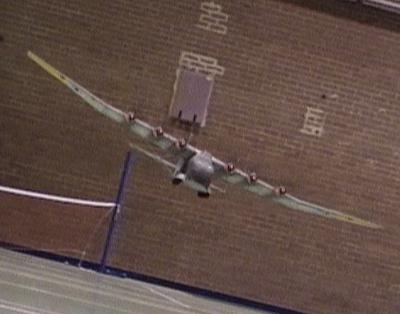 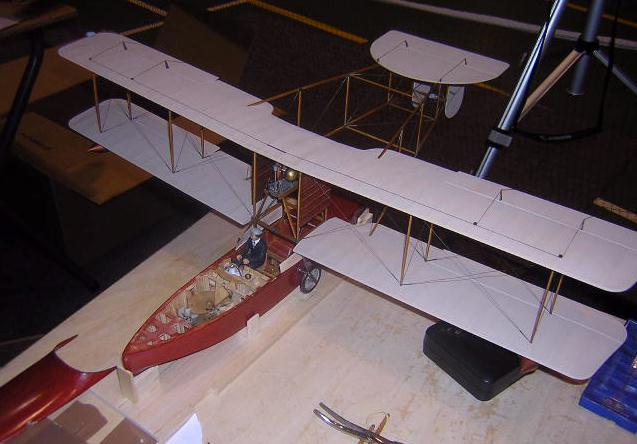 George Kandylakis from Greece was another modeller it was good to see and spend some time with, as we have corresponded but never met before. He is an excellent craftsman, and his models are real works of art. This is his Sopwith Bat Boat, a really delightful model, which unfortunately refused to cooperate when it came to flying. The front decking is removed in this photo - you can see it sitting in the bottom left of the picture. 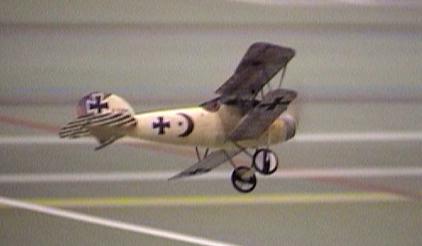 Saddest crash of the weekend had to be Peter Iliffe's wonderful new Albatros D.III, which went head on into the wall after doing three text book circuits, on Friday evening. Apparently there were bits everywhere, and when I spoke to Peter on Saturday morning he was (not surprisingly) rather glum. The amount of hours that have gone into the model do not bear thinking about. Thus, he had to enter his old 1/24 scale Albatros D.V in the competition (above), eventually finishing 5th. 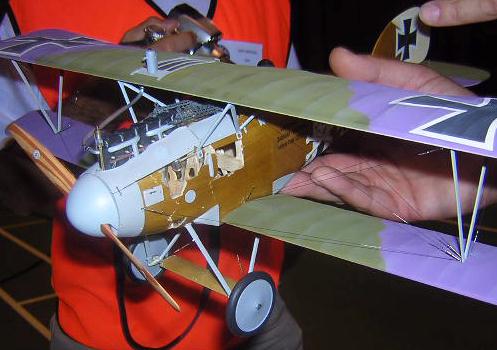 On Sunday, Peter brought the D.III in to show us after he had fixed the nose back on and reattached the wings. One stroke of luck was that the dummy engine (a real masterpiece) had been removed for the test flight on Friday, so had escaped any damage. The model will definitely fly again, thankfully. I suspect the biggest difficulty will be patching the sheet fuselage and matching the colour of the new bits to the existing stain. Still, if anyone can do it, Peter can. 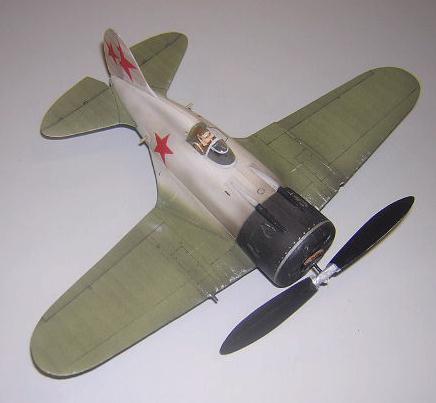 Richard Crossley's little Pistachio Polikarpov I-16 has no right to fly as well as it does. I mean look at it! Short fuselage, no tail moment to speak of and a hugely draggy cowling. Nevertheless, there it was circulating up near the roof completely ignoring the rules of aerodynamics. Best single flight was 46 seconds. A good static mark (that lovely weathered paint job must have helped) meant that Richard just pipped Tonda Alfery to first place in class. 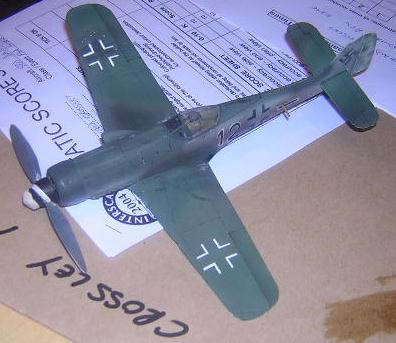 Pete Smart had this new foam FW 190D for Pistachio. Some intensive trimming work got the best time up to 28 seconds. Very nice sprayed finish as usual from Pete. 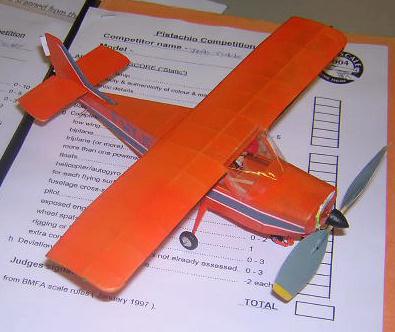 Fine flying Pottier 100 pistachio by Jean Claude Bourdeaud'Hui. Lost out on static marks though - not many bonuses on offer for a boxy, high wing monoplane. 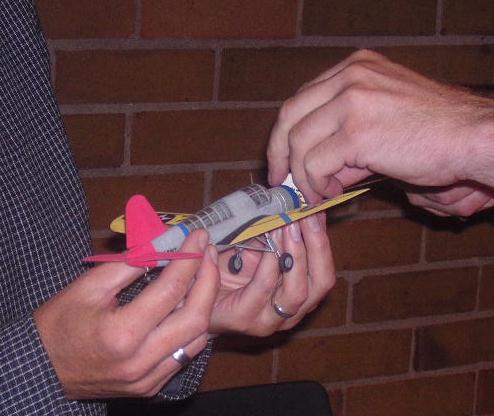 Tonda Alfery finishes winding his tiny foam Vought Sikorsky Kingfisher. It was an amazing flyer - the best two times being 71 and 76 seconds. The model tied on points with Richard Crossley's I-16, but placed second as in the event of a tie, the positions are decided on who got the best static score 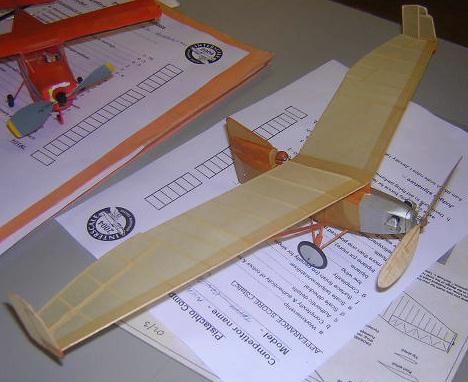 Nick Peppiat also got some great flight times with his Lippisch Storch - 71 and 75 seconds being his best. That put him 1 second behind Tonda when they were added up. This was a very nicely built model, so I am not sure why it lost out so much in static judging. Poor marks there dropped it down to 9th overall.

Back to home page